Petrogas and HitecVision are pleased to announce the signing of an agreement to acquire a portfolio of operated and non-operated upstream assets in the UK North Sea from Total Oil UK Ltd and Total E&P North Sea UK Ltd. The overall consideration for the business amounts to USD 635 million.

The transaction consists of a material, cash generative business based on a portfolio of assets in four producing areas in the UK North Sea, with an expected average 2019 production of 25,000 barrels of oil equivalent per day (boepd), placing it among the 20 largest producers on the UKCS. The transaction includes operatorship of two assets, the Quad 15 and Flyndre areas, a fully-owned FPSO, and an operator organisation of more than 110 employees and contractors.

The acquisition, which is subject to approval from the relevant authorities, is made by Petrogas NEO UK Ltd, a company jointly owned by Petrogas E&P UK Ltd , a subsidiary of Oman based Petrogas (a part of conglomerate MB Holding group) and NEO E&P, an investment platform of HitecVision. Petrogas and HitecVision intend to jointly build a full-cycle North Sea operator focusing on combining value creation from the prospective North Sea basin with high Environmental, Social and Governance standards. The current acquisition is the first step in the realization of this strategy and provides a fundament for further expansion through organic and in-organic activities, including growing its operatorship position further.

The fundamental and highest priority after completion of transaction will be the continuation of safe and efficient operations. With the operatorship capabilities and expertise of the organisation transferred from Total, and the free cash flow generated by the assets, Petrogas NEO will also pursue further growth. The assets to be acquired contain several organic growth opportunities, including infill drilling and development of discoveries close to existing infrastructure, and there is a potential for significant investments and increased activity in the years ahead. Petrogas NEO plans to actively exploit these opportunities, in close cooperation with the UK Oil and Gas Authority and licence partners, while at the same time focusing on improved environmental performance, in line with the company’s strategy of minimizing the carbon footprint of its oil and gas production.

The transaction is subject to customary regulatory consents and is expected to complete in Q4 2019, with an effective date of 1 January 2019.

The acquired assets are supported by more than 110 employees and contractors, including both onshore and offshore operations staff, together with other technical and support functions. Given the company’s growth plans and other opportunities, Petrogas NEO intends to build on the current Aberdeen presence of Total and no redundancies are expected as a result of the transaction.

In addition to the operated Quad 15 and Flyndre areas, the business to be acquired comprises the non-operated Golden Eagle and Scott/Telford areas, as detailed in the table below, and associated tax balances for all fields. 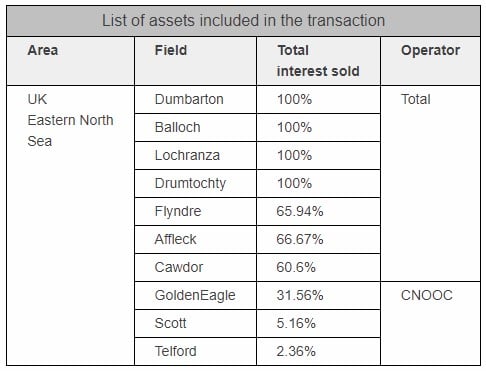 A platform for further growth HitecVision and Petrogas intend the acquired business to form the foundation of a larger UK E&P company. This transaction is the starting point for a European focused full-lifecycle energy platform, positioning the new company as a substantial independent producer in the UKCS with material built-in upside. This acquisition enables it to establish a long-term sustainable asset base that will generate material value for both investors and employees, and lay a solid foundation towards the objective of building a leading energy company, with production of more than 100,000 boepd.

Usama Barwani, CEO of Petrogas, commented: “Five years back, Petrogas stepped into Europe by acquiring Chevron’s assets in the Netherlands, opening a new international heartland with vision of consolidation and growth in the North Sea. This acquisition in the UK is a significant step in line with a wider vision, adding material asset base, a diverse portfolio and valuable talent pool.”

John Knight, Senior Partner of HitecVision, added: “In the last few years we have clearly seen the creation of a ‘New European Offshore‘ in terms of ownership , investment and innovative financial models. Private equity backed companies and joint ventures are emerging as among the largest investors in Norway and the UK. Larger companies are focusing their assets in Europe on a few key assets or exiting the region. In HitecVision we have invested in this theme in JVs like Vår Energi. Now this acquisition is our first step towards creating something similar in the UK.”